My mother, Elizabeth M. Mills, loved the idea of a blog so much she started writing, something she rarely considered except in short form. I’ve been having trouble thinking of relevant topics, and she’s been rather prolific lately. This is likely to be a precursor to her having her own blog. If you read us both, you’ll pick up on our different styles rather quickly. Without further ado, here’s Elizabeth’s first blog entry. Enjoy!  -Eryn V. Mills.

“Playing in the outdoors—especially when there is intimate association with birds and flowers, trees and waterfalls, mountains and storms—is one of the best ways of training the senses.”
Enos A. Mills

An autumnal flood here…I just didn’t see it coming.    Elkanah,  Jane and Carlyle Lamb would have been preparing to leave for Fort Collins and  Enos would have been out tramping or on his way to Butte, Montana.  They didn’t experience such a thing or they would have written about it. So much about our autumnal atmospheric experience was odd.  It was warm, foggy rain, without much lightning. No snow.  It was mysterious to be  in non-electric blackness. Enos’ “alert, awake, aware” was coming in handy…again. Sleeping sitting up, ready to jump at the slightest not-right sound. Not being able to hear anything above the roar of the new torrential tiny stream and the waters charging down Long’s Peak.  Could not shake the delightful feeling I was camping at Jim’s Grove on Long’s Peak when I was little, mesmerized by the excited waters of the alpine stream sounds and brighter than normal twinkling stars.  Trees smelled so pure, the air was so delicious to breathe deeply. The sky was a color closer to that blue-purple hue, that we get after a good atmosphere scrubbing, but this was a deeper color that I haven’t seen in many….many moons.  Sunrises were greeted with anticipation for light and a sigh of relief.  Sunsets were relished with exhaustion and trepidation.  Everything could have been so much worse. 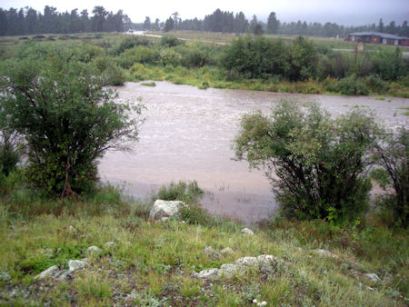 This had been a pond in Enos’ day, a languid stream in the last few decades, and for just a little while during the flooding, ponds again.

Enos’ cabin was nice and dry, as it sits on one of the dry spots on Twin Sisters.  The Gallery was badly flooded with the new stream being divided by the building. Two weeks before the water, we moved the exhibits back the Museum, nice and safe.   My rain gauge went neglected, I was too busy playing with the water to empty it.